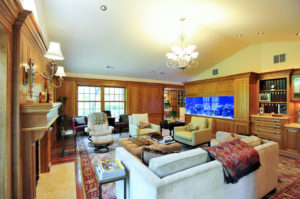 As a Design/ Builder, frequently I am asked what is the difference between your approach and the traditional approach to projects?

I have been in the business for over 30 years and have lectured at two national remodeling conventions on the subject so I think I can speak with some authority.

When I became a Design/ Builder way back in 1978, the American Institute of Architects (AIA) actually would not let me be a national member because in their rules and regulations they stated that either you were an Architect or you were a General Contractor.  It sounds so silly today to state that, but back then the AIA was run by purists that truly believed in that statement.  Fortunately the local AIA thought  it was silly also and allowed me all the privileges of being a member (they just did not tell the national that I was a local member.)   I would argue that who better to build it than the person that designed it.  In earlier times such famous people as Leonardo Di Vinci, Michelangelo, or Gaudi were all Design/Builders.  It worked very well for them.

So what are the differences.

In a traditional approach you have three separate parties.  The triangle is made up of a separate Homeowner, a separate Architect, and a separate Contractor.  This process has worked well for a certain segment of the marketplace.  The Homeowner initially hires the Architect to “Design” the project.   The problem is that in many cases when it comes to home remodeling, very few Architects want this type of work primarily because there are not enough dollars in the fee to be able to make a living being in the residential remodeling design business.  If I said to you that my fee to design and provide full service drawings was 7% of your $75,000 remodeling addition, then that fee would be $5,250.00.  To most Homeowners, that just sounds very high, yet that amount would just barely cover all costs incurred by the Architect.   It is interesting that Homeowners wishing to sell their houses would not have a problem signing a 7% contract with a Realtor to sell their $400,000 home and pay $28,000 in fees to someone that has spent maybe a year in educating themselves in their profession.  In Architecture it is 8 years of school/experience before you can even sit for the exam and generally another 2 to 3 years to pass all the parts.  So we are talking 10 years versus 1 year of professional qualifications before one can even call themselves an Architect.

Assuming that the Homeowner does sign an agreement with the Architect, and the Architect starts his design, in most cases, most Architects do not have the construction knowledge when it comes to figuring out certain economies that a contractor would know.  In other words the Architect might design an addition that is 13 feet wide.  The problem is that such things as carpet generally comes in 12 foot lengths, or lumber and plywood come in even increments.  Another example is one I have personally encountered where a Homeowner hired an Architect to design an addition.  The Homeowner indicated that they had a specific budget.  The Architect designed an addition that was 10 feet across the back of the house and 20 feet into the yard which would be a 200 square foot addition.  The Architect figured that this addition should cost $ 150.00 a square foot (a figure from one of his home builder buddies) which means that the addition would run approximately $30,000.  The problem here is that home remodeling contractors deal in lineal feet of new wall.  Let’s look at this project from that angle.  A 20 plus 20 plus 10 foot wall equals 50 lineal feet of new wall construction.  Now let’s look at it as I redesigned the addition to be 20 feet across the back and 10 feet out.   10 plus 20 plus 10 equals 40 lineal feet of new wall construction.  This addition is also 200 square feet but is 20% more economical to build.

Let’s say that despite these obstacles the Architect does a good job in his design and the Homeowner is happy.  Now comes the BIDDING process for the selection of the contractor.  There was a great quote from a NASA engineer when someone asked him a question about the space shuttle cost.  He indicated that it has always concerned him that the sum total of the NASA space program can be boiled down to the sum of the lowest contractor bids.  That holds true for remodeling projects as well.  Most Homeowners assume all contractors are created equal and that the Architect plans allow the contractors to be compared apples to apples.  Nothing can be further from the truth.  Generally the lowest bidder will try every way he/she can to extra the Homeowner so as to recoup projected losses, or worse yet, will find ways to cut corners by using inferior subcontractors or materials.  I have personally found this to be the case when it comes to home builders.  In many cases the Builder will also try to attack the Architectural plans by saying that the Architect didn’t detail the project the way the contractor assumed it would be and therefore an extra was in order.

In all cases of a change order the process in the traditional approach is thus:

In the Design/ Build approach the Designer/Architect and the Builder/Contractor are the same.  Some benefits to this approach are:

One perceived drawback to the Design/Build approach is that some Homeowner’s feel that it is giving the Design/Builder too much authority of the project.  It is true that in a traditional approach there are three parties watching each other rather than Design/Build where there are two.  My response is if there is trust in the individual the homeowner has chosen, then it is not a negative, but rather a positive.  The true Design/Builder will be extra careful to see to all the needs of the Homeowner.  If he/she does not, then there will be no repeat business and that person will go out of business very quickly.  I have been in business for over 30 years and have performed over 3,000 projects.  I must be doing something right.

There are some people that still prefer the traditional approach.  Many of these projects turn out just fine.  Since I have been in Design/Build, there has been a growing trend over the years to utilize this approach.  Whichever approach you select, my recommendation is do your homework and investigate the caliber of person you want for your Architect, Contractor, or Design Builder.  So many times,  Homeowners do not do their homework and suffer with someone that really is not qualified to perform the work.  Ask for job references, and not only references of past jobs, but current job references.  When you talk to these references, in my opinion, the most important question to ask is what was the Homeowner’s satisfaction on going thru the process?  Was it a good experience, or were their problems every step of the way?  How were the problems that came up resolved?  Just remember, price is soon forgotten, and it is the memories of going thru the project and the quality of the work that lingers on.