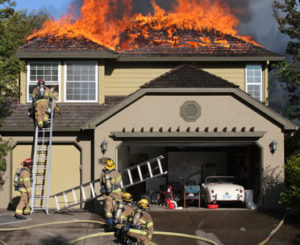 One of the most horrific things that can happen to a Homeowner is fire damage.   Equally horrific is after the fire, the ordeal that a Homeowner is put through to get their home and life back together.  Unfortunately, there are more horror stories on this subject than all other aspects of home ownership.  After over 30+ years in this business, I have had my share of dealing with good and bad Insurance Companies when it comes to these types of losses.  I have even set up a separate company “SBC Restoration “ to specifically deal with these kinds of insurance issues.  So sit back, relax, and let me tell you what you are in store for if you are the victim of a fire loss.

I will use, as an example, a project I did a few years back.  The names are not important, but their story is very typical of what can, and generally does happen.  The Homeowners were out of town when a lightning bolt hit their two story home and caused the second floor to catch fire.  A neighbor called the fire department, and after the firemen flooded their second floor with water, were successful in saving the first floor of the home.  The roof was totally consumed in the fire as well as most of the second floor.   Their Insurance agent indicated that they were covered and that they should go and get three contractors to give a quote to put back the house.  The agent also indicated that they were covered for contents (clothing, furniture etc…) and they should make a list of all items destroyed, along with their value, so that the Insurance Company could repay them for the loss.  The Insurance Company also told them to find accommodations, like a hotel or motel which the Insurance Company would pay for, while their house was to be repaired.  At this point, you the reader are probably thinking that this is a reasonable request and it should be relatively easy to comply with the Insurance Company’s wishes.  But think about what is being asked of them.  They need to find immediate lodging, retain or go purchase new clothes and basic items, get three contractors to bid the work, and make an inventory of all the items in the home that were damaged or destroyed.  And by the way, go about their daily lives of work, school, etc…How would you feel in their position?

Let’s take the issues our Homeowner needs to address and look at what happened as well as what should have happened.

The Homeowner needs to document their contents before a disaster occurs.  With digital photography this has become a lot easier to accomplish.  This is what I have done on my home.  It took me 2 hours to go into every room and photograph each dresser; drawer, nook, and anything that looked like it need to be remembered.  I then made a disk and placed it in my safety deposit box away from the house.  I also photographed the exterior.  For those who want to go further, you can actually make a list and categorize all your possessions and along with the photos, you will be well prepared in the event of a loss.

Here is the subject I know the most about and am willing to depart my wisdom and experience.  In my opinion, the absolutely wrong approach a Homeowner should take in an Insurance loss is to get three bids.  We all have this 3 bid mentality hammered into our psyche, but in this case it does much more harm than good to the Homeowner.  Most Insurance Companies would love you to go out and select 3 contractors to bid the work because that gives them an out when it comes to negotiating a final settlement.  If you get three bids, guess which one the Insurance Company will want to take to start negotiating the final claim?  You have lost all leverage over getting an equitable settlement because you picked the contractors and the Insurance Company will say that it assumes you picked reputable contractors.  Also realize that the contractors you picked are put in a position of coming up with the lowest bid so that they can get the job.  They are not going to confront the Insurance Company, who has the money, because they will be quickly dismissed if they try to add questionable items that you should be entitled to.

All right, so what does one do to protect oneself from being taken advantage of.  What I promote is at the onset of this process is for the Homeowner to not get three contractors, but rather get one contractor/expert that is solely on the Homeowner side and will act on the Homeowner’s behalf in negotiating with the Insurance Company to obtain a settlement.

One final example.  This one is the most important in whom the Homeowner chooses.  The second floor was where the water came in, but the first floor ceiling got the major hit of water damage.  Even though it was intact, there was mold growing everywhere and there were signs of major deterioration in the drywall.  The Adjustor indicated that he was not willing to replace the drywall, but rather said to us he would pay for us to clean it and let it dry out before repainting it.  Would you accept that in your house?  Also there were charred wall studs that the Adjustor said were structurally sound and that he would pay for only sealing the charred wood.  Would you accept that in your house knowing that every time it rains or gets humid that the smell of charcoal will permeate the house?  Remember in the three contractor bid scenario, they would be forced to abide with the Adjustor’s wishes.  We, on the other hand, being experts, convinced the Adjustor and the Insurance Company that it was not acceptable because it was not in the Homeowner’s best interest .

All in all, our initial projected amount of loss that we presented to the Insurance Company was for $152,000.  The Adjustor’s initial determination of loss was $84,000.  After two months of negotiations, we settled for the amount of $ 138,000.  Had the Homeowner settled with the Insurance Company for the $84,000, the Homeowner would have had to live with recurring mold on the ceiling, the smell of charred wood every time it rained or was humid, and windows on the first floor that looked different than the ones on the second floor.

A couple of additional comments:

Some Insurance Companies are more sympathetic than others in settling a claim. There are a few Companies and a few Adjustors that I have met over the years that are very fair minded persons and truly try to help.   Next, I want to reverse the comments and say that there are some Homeowners that try to obtain funds from the Insurance Companies that they are not really entitled to.  This is also a fact of life that we all must recognize.  Finally there are also Homeowners that see all this money being spent on their behalf that try to keep some for themselves.  The particular instance I am referring to is the contractor overhead and profit portion of the settlement.  Some Homeowners feel that they can do the repairs themselves and think that they can pocket the contractor’s overhead and profit portion of the settlement.  This is a very dangerous activity for the Homeowner to be involved in.  First and foremost I must tell you that Insurance Companies discourage this practice by having a policy that if a qualified contractor is not used to reconstruct the project then the Homeowner does not have the right to receive the contractor’s overhead and profit.  So you Homeowners out there that want to do your own construction and take the money and run take heed.  You are not entitled to contractor overhead and profit of the overall settlement.  Remember that the Insurance Company’s first obligation is to protect the investment of the home and discourage the Homeowner from becoming a do it yourselfer.

As always, we at the Stan Better Family of Companies are always here to help you in your time of need.

We have the ability to act on your behalf.  To fight for the Homeowner’s best interest to get a fair and equitable settlement.  We are not on any Insurance Company’s “preferred list” therefore we have no allegiance nor will we be intimidated by an Adjustor or the Insurance Company. We have Architect/Contractor experts to assist in providing expert opinion in the negotiations.  We have the special computer programs that the Insurance Companies and the Adjustors understand and prefer.  And we have the construction company “SBC Restoration” capability to build the project back the right way.  I hope it never happens to you, but if it does, or if you know of someone that might need our services, I hope you will give them our name.